For quite some time I have had a Pebble smart watch now and was quite happy with it. Certainly, had it died some unexpected death I would have happily bought a new one. But for this Christmas I was given a new shiny toy — an LG G Watch (the original, not the new, round R model): 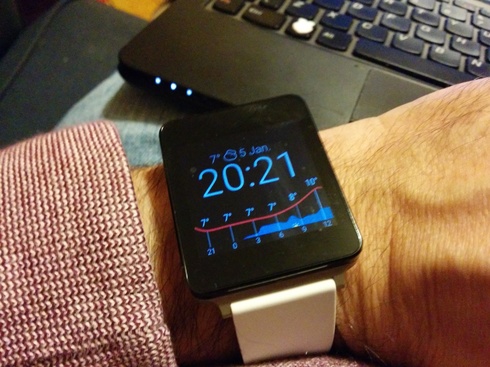 It looks just as unstylish and nerdy as the Pebble but the wristband at least is slightly nicer (and also a standard size so you can replace it easily with something less offensive should you be bothered). I got the white model (the only other option is the black model) but that only refers to the wrist band and the back side of the watch which you don't see; basically it's a black watch with a white wrist band.

Battery life is better than expected thanks mainly to having had very low expectations. After a full day (~16h of use) it still has between around 50% of power, so you get more than 24h of usage but still have to charge it every day. This is still better than my phone but sadly that is a very low hurdle to take.

The display is good enough and I find it easier to read than the Pebble's display where my ageing eyes frequently struggled to read more than the headline of any message displayed. When you are not using it the display dims and turns grey scale only (all to save energy I assume). This works surprisingly well for me. At night or in the cinema you can also activate a cinema mode where the screen is completely off when not used.

The interface takes some getting used to — there is a very short tutorial but usually searching the internet tends to tell you quickly what you want to know. It all works ok for me. Sometimes I wish there were buttons for some common actions as the swipe actions don't always work for me when done casually but this is not a big problem for me so far.

Initial setup felt more like using a Windows system — the Android Wear app on my phone crashed right after pairing and the watch spent the first few minutes downloading updates and rebooting various times. I walked away during this but it felt like around 10 minutes between powering up and actually being able to do anything with the thing.

The watch faces that come built-in are a bit boring for my taste but there are nice ones you can install. (Installing watch faces and apps means installing them on your phone and then they'll just automagically show up on the watch.) I am currently using InstaWeather for Android Wear and am quite happy with that. (Over Christmas I managed to amuse the family by showing the Santa watch face that came with Google Santa tracker app).

Besides that I only use the Google Keep app which allows me to tick off items from my shopping list without taking out and unlocking my phone and very occasionally the UK Trains for Wear app to check on train times. To start these apps, the Wear Mini Launcher seems to be the tool of choice and works reasonably well for me.

The real advantage of the Android Wear over the Pebble is that you can not only read notifications but also dismiss them on the phone. Initially I found this irritating but now appreciate it as it actually reduces the urge to idly click on the notifications once you take out your phone. One does have to make sure however to not dismiss things that should be handled soon lest one forgets all about it.

The whole voice thing has not proven useful for me so far. The voice commands don't work for me in German (my phone is set to German and the watch copies these settings) and while searches do work mostly I find little occasion where actually talking to my watch is not socially awkward or even annoying to those around me. My one attempt to impress my friends was a total failure so I left it at that.

In conclusion I am quite happy with my new watch although the delta to the Pebble isn't big enough that I'd spend any money to replace an existing Pebble. So, if you are happy to buy into the Android world (and risk turning your smart watch into a door stop should you chose to change phone platform) this might well be a watch for you (and of course there are prettier Wear devices).

All posts
All tags